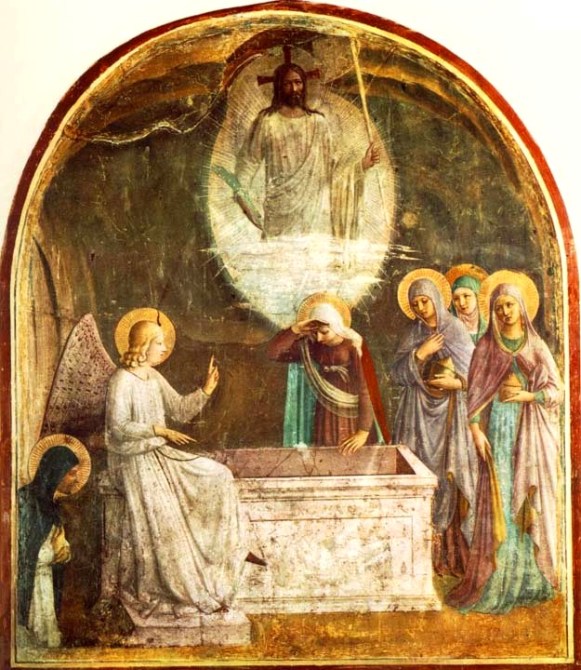 Image: Fra Angelico’s Resurrection of Christ and Women at the Tomb

In this fresco of the Resurrection by Fra Angelico, one senses both wisdom and playfulness. The women have been mourning at the tomb. Their countenances reveal that they have discovered that the body is missing, but they are still trying to make sense of the meaning of its absence. Perhaps they think the body of their beloved Jesus has been stolen. The woman standing at the center expresses through her body the language of quest. She has been on a quest to find the Lord and now he is not where she expected him to be. She looks down, as does another woman, while the other women look toward the angel. None of them see Jesus.

Meanwhile there is Jesus right behind them, in radiant glory, full of splendor, resurrected! The angel’s finger clues in the women: the angel points up towards Jesus, not down to the tomb and the place of death. Of course, we know from the Gospel accounts that eventually they will see Jesus, and recognize the one that they had been grieving is alive. But for now, they are still looking the wrong way, because they keep looking to the place of death, and so they remain lost in their confusion. Yet the Resurrected Christ is no less Resurrected just because the women do not yet know of it.

At the same time, these women are among the first to encounter the Resurrection because they, at least, came to the tomb. The men and probably other women, too, departed, giving up on the possibility of new life, even though Jesus had promised to them that he was to prepare a place for them, so that where he was, they also would be. Yet such words must have seemed too good to be true in the trauma of the crucifixion. Both the looking downward and the flight away from the tomb are understandable: after all, human concepts alone cannot grasp how death can lead to new life. The women came prepared to tend to a dead body, and with such expectations, they could not see the living one, because they kept looking in the place of death, and following their own narratives instead of being open to the Lord’s creative, resurrective power.

In our own lives, personally and politically, we tend to get caught up in our own narratives of what is possible and what is not. We look around us at the available scripts and, like the women at the tomb, forget to in a new direction where we may see God. For example, the political situation between the US and North Korea is escalating. Both countries are only looking at conventional answers that may lead only to death and not to life and to peace. We need to look for a third way, or even a fourth or a fifth way. Instead of looking down into the empty tomb, we need to look for life outside the tomb. What are the non-violent solutions that can move us forward toward peace? Where are the creative answers? Is there a different way to pose the question itself so that the answer leads to life and not to death?

Sometimes in our personal lives, too, we look only into the empty tomb without also looking for where the Resurrected Christ is alive and in our midst. Perhaps, as was the case for these women, the answer is right before our eyes, if only we turn around. For we find the living Christ in moments of peacemaking, small and great acts of reconciliation, and decisions to choose love over fear. Perhaps we need the simple assistance of a person near us who can point us in a new direction, an angel in our own midst. God is always seeking to communicate with us, but do we look and listen? Perhaps we need to turn around something in ourselves–for example, think about past experiences of fear and confusion like those that the disciples experienced not as instances of failure, but rather as the moment right before the Resurrection, the moment right before sunrise, when the Lord rises and radiantly shines his light upon us.

Where are the places in your life that need Resurrection? What are the conventional narratives that keep you from finding the living Christ? What are the small signs of burgeoning new life in your midst? Who are the angels that point the way? And when the Lord speaks your name, will you be ready?